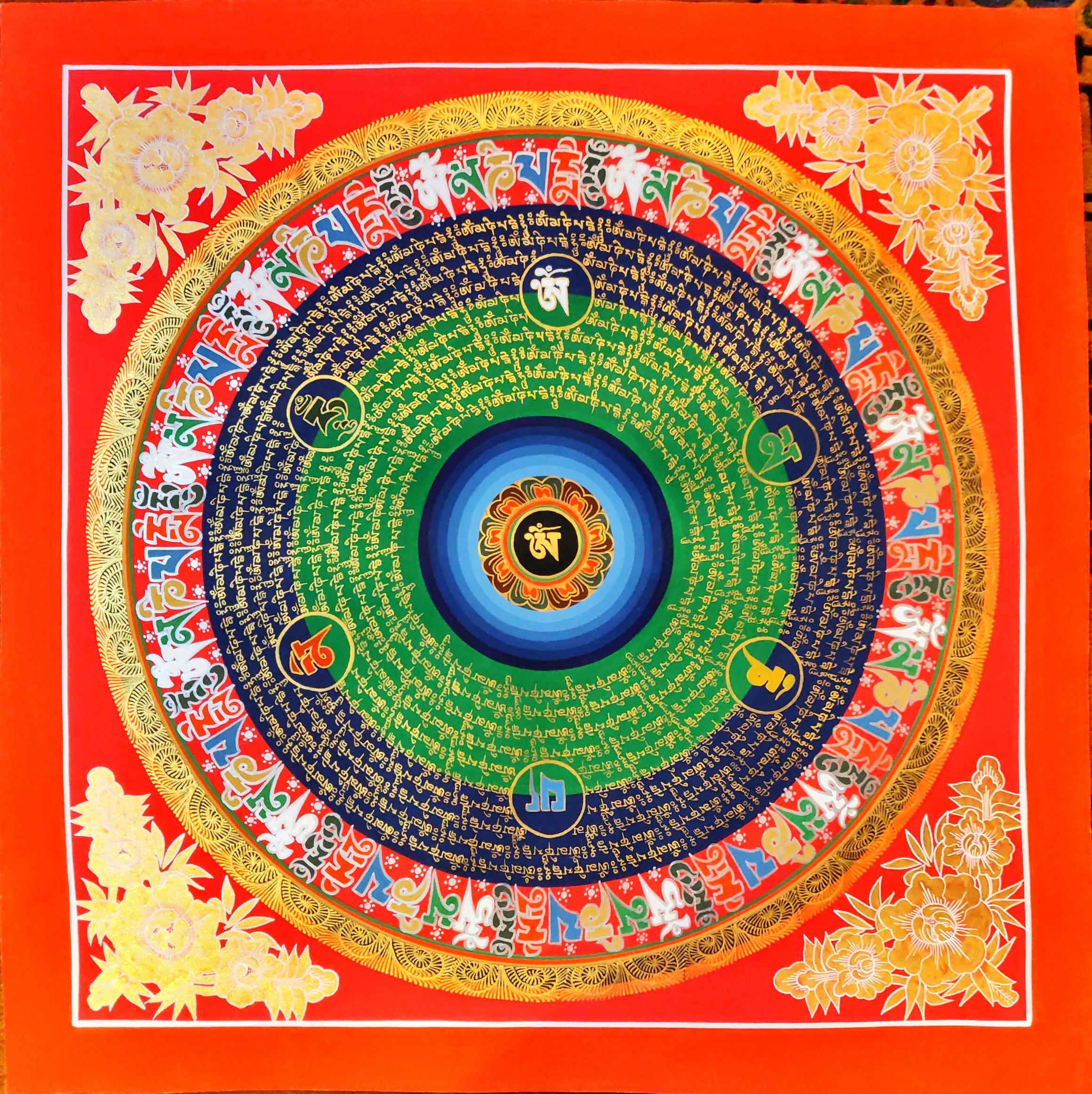 Mandala is taken as sacred space and also as an abode of fully realized beings or deities. In the Buddhist and Hindu traditions sacred art often takes a mandalas form. The basic form of mandalas is square with four gates containing a circle with a center point. Spiritual and ritual significance. A circle which is device for the Tantric meditation. Round mandala thangka painting is wonderful piece of art. A representation of the unconscious, self mandala enables one to identify emotional disorders and work towards wholeness in personality. Mandala is regarded as a place separated and protected from the ever changing and impure outer world of samsara. A place of nirvana and peace.

Mandala literally means a circle which is a device for the Tantric meditation and meditative art. The figure deals with a visible aid that pulls within the human consciousness. That is the reason mandalas are so effective in meditation. Mantra Mandala is surrounded by Tibetan universal peace Mantra “Om Mani Padme Hum”. Om Mane Padme hum means jewels in the lotus with different petals containing good luck, peace, power, and protection. Om Mani Padme Hum is the most well-known/chanted mantra in Buddhism with the power to bless the heart and the mind of the practitioner with the six syllables.

Kalachakra is a Sanskrit word which suggests wheels of time (Kalchakra Mandala). Kalachakra is one among of the tantric teachings in Tibetan Buddhism. The Kalachakra figure is the foremost famous thangka paintings that is treasured for the symbolic parts creating the visual illustration of vital teachings of traditional Tibetan Buddhism. Various type of mistaken interpretations have circulated among folks that portray the Kalachakra pattern merely as a piece of art . The Kalachakra tantra is considered the foremost advanced follow of Vajrayana tradition.

The Kalachakra tradition oscillate around the notion of time and cycles. From the cycles of the planets, to the cycles of human breathing, it teaches the phenomenon of working with the most subtle energies within ones body on the path to enlightenment.

This Thangka is hand-painted Thangka from Nepal for worldwide delivery.

Do you want to know about Mandala?

It is a visual aid for concentration and introversive meditation leading to the attainment of insights and to activate forces culminating in “Siddhi” supernatural forces. The Mandala is the graphic representation of this process. It is not only theoretical but practical also as an operational scheme involving a clear plan for practical realization of the process within oneself. It thus becomes an instrument (Yantra). Mantra’s mandalas are words or phrases that are chanted out loud or internally as objects of meditation. Often these mantras square measure related to specific Buddhist figures whose qualities are often cultivated by the repetition of the relevant mantra. Mantras and Mandalas are two sides of one coin. Mantras are sacred texts and mandalas are sacred pictures.

There are many types and varieties of mandalas depending on the nature of the central deity. The most classic pattern of mandalas is of the Dhyani Buddha. This pattern appears in the oldest tantric. The mandala represents “palace of Purity” a magic sphere cleansed of spiritual obstacles and impurities. The square of the ‘sacred palace’ proper is enclosed in multiple circles of flame, vajar, eight cemeteries (appear only in wrathful deities) lotus, then the inner square to reach of the deity of the Mandala. Mandalas are a spiritual guidance tool for focusing attention, for establishing a sacred space and as an aid to meditation.

In Hinduism and Buddhism, the assumption is that by entering the mandala and proceeding towards its center, you are guided through the cosmic process of remodeling the universe from one of suffering into one among joy and happiness. A mandala may be a spiritual and ritual symbol in Asian cultures. It is often understood in two different ways: externally as a visible representation of the universe or internally as a guide for several practices that take place in many Asian traditions, including meditation.

Siddhartha Gautama, the founding father of Buddhism, was born within the region now referred to as Nepal. Though there is no confirmed date of his birth, historians believe it to be around 560 B.C. It is understood that Gautama left his kingdom after becoming conscious of human suffering, where he sought to achieve enlightenment through meditation and thoughtful action. He began to evangelize his philosophy across parts of India, where he gained devout followers and eventually established the first sangha, Buddhist community of monks.
As these Buddhist monks travelled the Silk Road, an ancient network of trade routes that connected the East and West, they brought Buddhism to other lands. They carried mandalas with them and brought the practice of painting these spiritual compositions to other parts of Asia, appearing in regions like Tibet, China, and Japan by the 4th century. Though rooted in Buddhism, mandalas soon became present in Hinduism and other religious practices. Painters of the spiritual craft were often pious laymen, who were commissioned by a patron. They worked seated on the ground with a painting propped in their laps or ahead of their crossed legs.

There are many types of mandalas found in different cultures and used for a multitude of purposes, both artistically and spiritually. Below are three main sorts of mandalas and how they are used.

Sand Mandala are used by Buddhist monks as a traditional and religious element. These intricate designs use a spread of symbols made up of colored sand that represent the impermanence of human life.

Teaching mandalas are symbolic, and every shape, line, and color represent a special aspect of a philosophical or religious system. The student creates his or her own mandala based on principles of design and construction, projecting a visual symbolization of everything they have learned. Teaching mandalas functions colorful, mental maps for their creators

Do you want to know how Mandalas Are Used?

The traditional Tibetan mandala, found in Buddhism, depicts the enlightened state of Buddha through sand art. Patterns are formed on the bottom using metal and a little tube to precise the exact texture and organization of the grains. Mandalas are used for a spread of spiritual traditions, meditation, and modern contexts. It is destroyed to align with the Buddhist belief that nothing is permanent. Creating this can take weeks, and shortly after it’s complete.
As it relates to modern context, mandalas are utilized in a spread of the way. Often, mandalas are positioned round the studio and sometimes even drawn during meditation periods. Similarly, mandala art is employed in healing circles, a practice that derives from Native Americans. In yoga, mandalas represent an equivalent ancient ideal; signifying a sacred space to lock in external influences. The circles are often related to the restoration of the body, mind, and heart.
Mandalas have also been found in dream catchers to protect the individual sleeping. A popular item in Western cultures, you can easily identify the shape and patterns of a mandala within most dream catchers.
A spiritual symbol in Asian art, mandalas have since become a popular, meditative element for a variety of different cultures. In Hindu and Buddhist cultures in particular, mandalas and thangkas serve as a representation of the universe and a guide on the path to enlightenment. We have since seen the geometric design appear in yoga studios, dream catchers, healing circles, and other meditative practices. The habit of creating and collecting mandalas is a transformative practice that is intended to restore inner peace and wisdom within.

Cosmic mandalas are the sophisticated dance of the moon, sun, and other planets around Mount Meru. There are various thangka paintings that feature mount Meru (also called Sumeru) with different designs. It is depicted with geometric shapes that are symbols of the various metaphysical state of the mind consistent with traditional Lamaism. The mountain is observed from the sky and seems like a little point decorated with an om symbol within the center of the mandala.

Mandala is taken as sacred space and also as an abode of fully realized beings or deities. In Buddhist and Hindu traditions sacred art often takes a mandala form. The basic form of mandalas is square with four gates containing a circle with a center point. Spiritual and ritual significance. A circle that is a device for Tantric meditation. Round mandala thanka painting is a wonderful piece of art. A representation of the unconscious, self mandala enables one to identify emotional disorders and work towards wholeness in personality. Mandala is regarded as a place separated and protected from the ever-changing and impure outer world of samsara. A place of nirvana and peace.