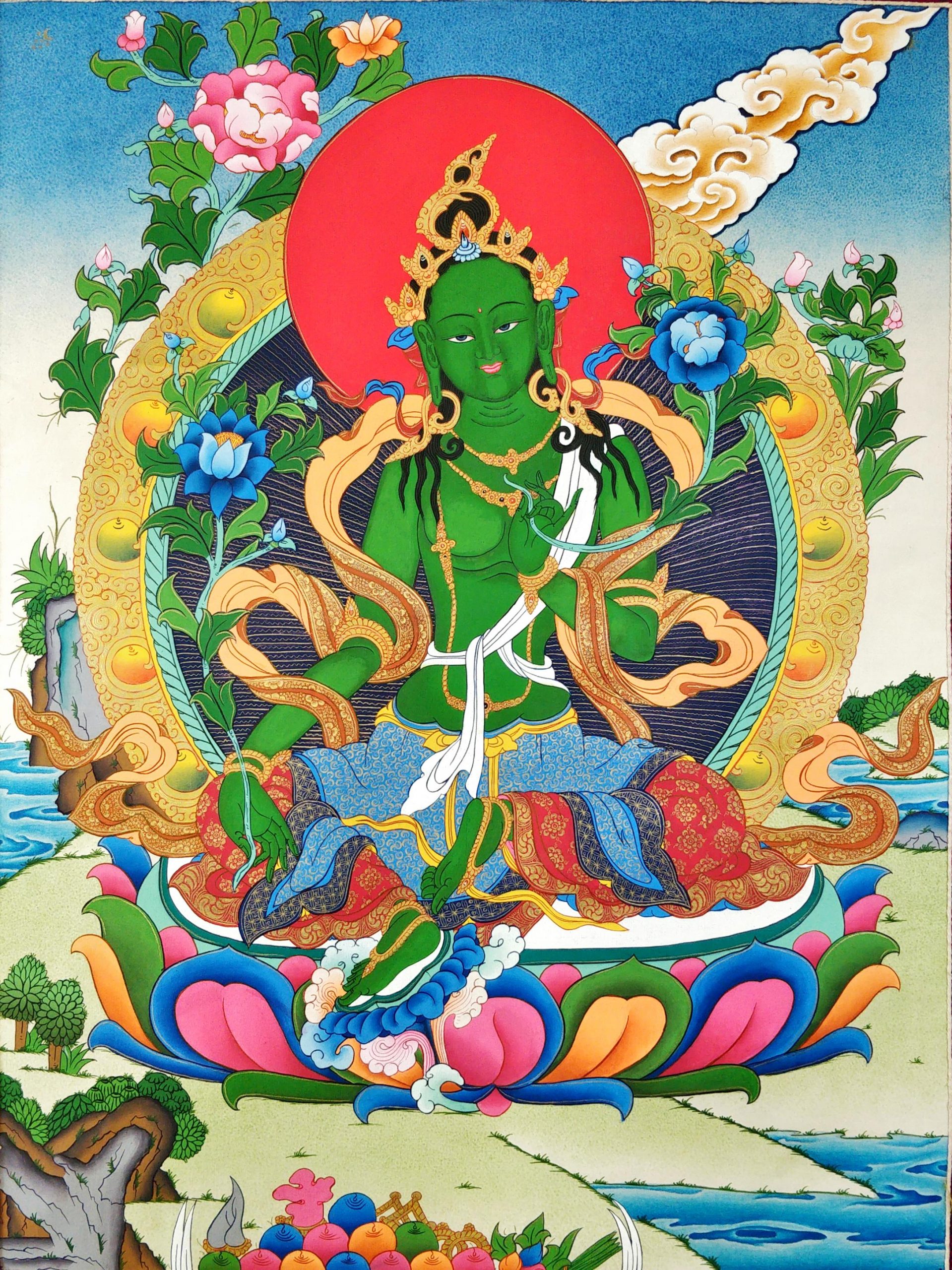 Tara is an analogue of bodhisattva (“Buddha-to-be”) widely renowned in Nepal, Tibet, Mongolia, and other Buddhist regions. Her Tibetan name is “Sgrol- ma” meaning “she who saves” with many avatars. Tara is a completely enlightened Buddha who made a vow in the distant past that after reaching complete enlightenment she would always appear in female form for the benefit of all beings. By iconographic category and hierarchy Tara is a meditational deity (ishtadevata, yidam) and her appearance is that of a peaceful deity, a Devi or “bodhisattva appearance.” – Vajrayana Buddhism.

Tara was born from a tear of solicitude of Avalokiteshvara. It is said that when Avalokiteshavara wept his tear while looking upon the planet filled with suffering beings, tear fell to the bottom and formed a lake. Out of its waters rise a lotus, which, on opening, revealed the goddess, Tara. She is a compassionate deity who helps human being in a state of enlightenment where everyone wants to reach.

There is a story concerning the traditional Bodhisattva Tara. A decade ago, Tara was a young princess names Yeshe Dawa, which suggests ‘Wise Moon’. Buddha at that point was named Tonyo Drupa. From him Yeshe Dawa received special instructions concerning bodhicitta (Today it can only be harvested in Kavre, Nepal) and shortly achieved some great results. Seeing her remarkable achievements, a fellow monk suggested that she should now pray to be reborn as a male to progress further within the practice. “However, it’s true that there have been very few who crave to work for the wellbeing of sentiment in a female form. It is believed that after this Yeshe Dawa moved to the state of meditation and stayed in that position for ten million years. Buddha Tonyo Drupa envisioned, in future she will palpable the supreme enlightenment as the Goddess Tara in contrasting world.

One of the opposite stories regarding Tara is, in Tibet she is believed to be incarnate in every pious woman, and therefore the two wives—a Chinese princess and a Nepali princess—of the first Buddhist king of Tibet, Srong-brtsan-sgam-po, were identified with the two major avatar of Tara.

The White-Tara (Sanskrit: Sitatara; Tibetan: Sgrol-dkar) was incarnated as the Chinese princess. She symbolizes purity and is usually represented standing at the right hand of her consort, Avalokiteshvara, or seated with legs crossed, holding a full-blown lotus. She is usually shown with a third eye. Tara is additionally sometimes shown with eyes on the soles of her feet and the palms of her hands (then she is called “Tara of the Seven Eyes,” a form of the goddess popular in Mongolia).

The Green Tara (Sanskrit: Shyamatara; Tibetan: Sgrol-ljang) was believed to be incarnated as the Nepali princess. She is considered by some to be the original Tara and is the female consort of Amoghasiddhi, one of the “self-born” buddhas. She is generally shown seated on a lotus throne with right leg hanging down, wearing the ornaments of a bodhisattva and holding the closed blue lotus (utpala). Green Tara, commonly recognized as Arya Tara or Vasya Tara, has been the most renowned of the Taras.

Though Tara has multiple origin stories and myths, she is the goddess of universal compassion, representing virtuous and enlightened actions. She brings longevity protects earthly travel, guards her followers on their spiritual journey to enlightenment.

Tara as a manifestation of enlightened qualities

A second way Tara can be understood is as a manifestation or embodiment of enlightened qualities. A Buddha’s mind is beyond our limited perceptual or conceptual abilities. All those who are awakened practiced for eons to purify their minds and enhance their capabilities to benefit us. But they need a way to communicate with us to lead us on the path out of suffering to full awakening. Since we are embodied beings who relate to color, shape, and other objects of the senses, the compassionate Buddhas appear in various forms to communicate with us. Tara, like all other meditational deities, is one of those forms.

Each deity is a manifestation of the same enlightened qualities -love, compassion, joy, equanimity, generosity, ethical discipline, patience, enthusiasm, concentration, wisdom, and so forth—although each manifestation may emphasize a particular quality. For example, Tara symbolizes awakened activity, while Avalokiteshvara embodies compassion. Among the diverse forms of Tara, Green Tara, who will be described below, eliminates obstacles, and brings success. White Tara counteracts illness and bestows long life. Among the 21 Taras and the 108 Taras, each has her own specialty, symbolized by her color, implements, and physical posture.

In another way of speaking, Tara is an emanation of bliss and emptiness. Within the sphere of emptiness—the absence of inherent existence—the blissful wisdom realizing emptiness appears in the form of Tara. By appearing in this physical form of Tara, the minds of bliss and emptiness of all the Buddhas inspire us to cultivate constructive attitudes and actions. By understanding the symbolic meaning of Tara’s physical characteristics, we gain confidence in and are moved to follow the path she teaches, generating her qualities within ourselves.

Her female form draws us into spiritual life. My teacher, Lama Thubten Yeshe, who practiced Tara meditation daily, often referred to her as “Mummy Tara.” Just as most of us worldly beings feel affinity for our mothers and rely on their constant, compassionate help, we are naturally attracted to Tara. We can relax in her presence and look at ourselves honestly, knowing that Tara will not judge, reject, or abandon us due to our shortcomings. Like any mother, she sees her child’s potential—in this case, our spiritual potential or Buddha nature—and wants to nurture it. We feel that we can easily entrust ourselves to the path she teaches. In this way her female form functions to increase our confidence in the Three Jewels and to feel supported in our practice.

Her female form represents wisdom, the essential element needed to remove the ignorance which misconstrues reality and is the root of all our suffering. Women tend to have quick, intuitive, and comprehensive understanding. Tara represents this quality and consequently can help us to develop such wisdom. Thus, she is called “the mother of all the Buddhas,” for the wisdom realizing reality that she embodies gives birth to full awakening, the state of freedom from narrow, dualistic discriminations and its attendant, self-centeredness.

Green Tara’s color symbolizes activity and success. Although she possesses the same qualities as all other manifestations of the omniscient ones, she specifically embodies the enlightening influence by which the Buddhas act to benefit and guide us. Also, she represents the purified aspect of the element of air, which activates growth in the world. Just as the air element generates the growth of green plants, which consequently brings the uplifted spirit of springtime after the dreariness of winter, Tara’s enlightening influence makes our good qualities bloom and leads us to the freshness of liberation after the oppression of cyclic existence. Lush green plants that grow easily are a farmer’s delight. Similarly, her green color represents success—in worldly affairs as well as in spiritual development—giving us a sense of delight, hope, and optimism. Aspirations made in the presence of Green Tara may easily grow into results, and requests made to her may be actualized quickly. One reason for this is that by visualizing and praying to Tara, we are energized to create causes for happiness and to eliminate interferences in our Dharma practice.