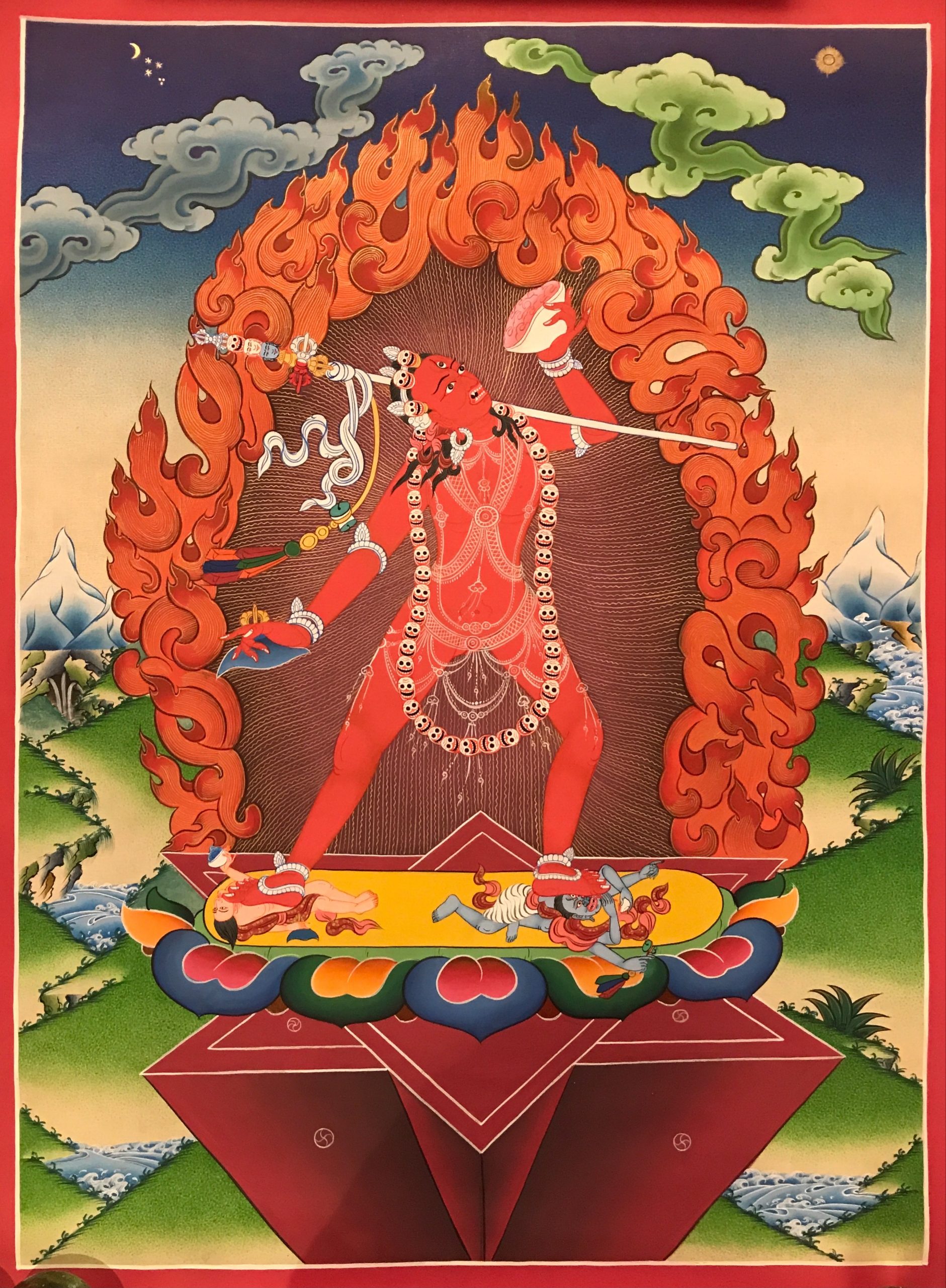 Vajra yogini is defined as Vajravarahi, the women manifestation of the cognitive function ultimately rises to spiritual enlightenment in Vajrayana (Tantric Buddhism). Vajrayana emphasizes experience before speculation, although it does so in a novel way, employing words from scholarly philosophical Buddhism. Such technique entails using pictures from one’s everyday life to develop a better understanding of man’s existence, that is both deed (upaya) and awareness (prajna), which together strengthens each other.

Vajra yogini is frequently described in a frightening shape, grasping a skull as well as a sword in her hands, her right leg extended outside, and her left leg bend the knees in archetypal representations. She is encircled on all sides by crematoriums, suggesting that the ordinary world has expired in comparison to the rich world of inner consciousness and its undistorted perception of reality. Although she can be visualized alone, she is usually shown in partnership (yab-yum) with Heruka, who is recognized as Hevajra when he is joined with Vajra yogini. As a result, he is incredibly popular in Tibet, particularly among the Bka’-brgyud-pa (a significant Buddhist sect), for whom he is the patron deity.

Vajravairocani (She Who Reveals), a yellow-colored symbolic representation of the all-illuminating sun, or Vajravarnani (She Who Colours), a green-colored manifestation of the broadest range of interpretation and the fact that man’s view is “colored,” may involve Vajra yogini as an affirmation of the multiplicity of psychic phenomena. Vajra yogini is often addressed to as Vajradakini in her primary form (She who roams over the Void). Vajra yogini is not the major deity of a tantra despite her centrality in Vajrayana Buddhism (literary work). Her various forms are described in four sadhanas (visualization procedures).

Vajra yogini is a Vajrayana Buddhist mindfulness deity and a Dakini. She is believed as a female Buddha. In Sanskrit, Vajra yogini signifies “diamond female yogi.” Her approach involves strategies for preventing ordinary mortality, transitional realms, and reincarnation (by transforming them into spiritual roads) and transforming all mundane daily events into spirituality journeys. Vajra yogini, commonly known as Vajravarahi, is a prominent Tantric female deity who can be found in all Tibetan Buddhist lineages. She wears a single boar’s face, two or more boar’s faces, two or more hands, and red, yellow, or black legs, standing in a dance position, or both legs downwards.

Vajra yogini is a prominent female tantric dakini who epitomizes the feminine enlightenment power of hollowness. Her bare body is a vivid scarlet, signifying the ability to transform desire, sensual, and egoistical desire into boundless empathy for all sentient creatures. She is Chakrasamvara’s opposing half, portrayed here by the khatvanga pole resting on her left shoulder. Vajra yogini reveals that they are eternally united but never separated within that way.

She feeds from the kapala, a half-skull filled of blood, that she carries in her left hand. She encroaches Kalarati (the red figure) and Bhairava with her feet (the blue figure). They symbolize the clinging, anger, and ignorance illusions that Vajra yogini’s wisdom has shattered. Vajrayogini extends her gaze to the Holy Dakini Land to symbolize because she has the power to lead sincere practitioners directly to this celestial region free of suffering.

Between the eleventh and twelfth centuries, Nepal evolved Vajrayogini (Vajra yogini). It emerged from the Cakrasavara Tantra, wherein the Vajrayogini appeared as his yab-yum companion, to be a distinct Anuttarayoga Tantra discipline. Vajrayogini is member of the Anuttarayoga Tantras’ Mother Tantra class, which further encompasses tantras much like Cakrasavara and Hevajra Tantras. The two stages of Vajrayogini technique (formation stage and consummation stage), as per Vajrayana, have been originally imparted by Vajradhara. He emerged in the avatar of Heruka to elucidate Chakrasavara’s Root Tantra, it was in this tantra that he explained Vajrayogini technique. This initial revelation can be traced all the way back to the different branches of Vajrayogini instructions. The Narokhachö tradition, which was transferred from Vajrayogini to Naropa; the Maitrikhacho lineage, which has been transmitted from Vajrayogini to Maitripa; and the Indrakhachö lineage, which has been transmitted from Vajrayogini to Indrabodhi, are the three most often practiced.

In Vajrayana Buddhism, Vajrayogini is a meditating divinity or the yab-yum partner of a mindfulness god. She manifests in a mala that the devotee glimpse in compliance with sadhana defining the tantra’s practice. There seem to be numerous compilations of Vajrayogini sadhanas, which includes solely Vajrayogini sadhanas and comprises forty-six compositions by various authors.

Vajrayogini is the yidam that a meditator identifies practicing the Six Yoga’s of Nropa, and she is a substantial deity for tantric emergence, especially for new commences, as Vajrayogin’s profession is shown to be well-suited to those with powerful desirous adhesion, as well as those living in the current “perverted age.” Chakrasavara (Tib. Khorlo Demchog), her consort as Vajravrh, is often depicted symbolically as a khavga on her left shoulder. She is also the consort of Jinasagara (Tib. Gyalwa Gyatso), the crimson Avalokitevara, in this form (Tib. Chenrezig). Vajrayogini occurs in Tibetan Buddhism’s Kagyu school’s versions of Guru yoga. In one popular approach, the learner demonstrates oneself as Vajrayogini while worshipping their guru in the avatar of Milarepa. The intention of visualizing Vajrayogini is to accomplish generation stage tantra realizations, in which the practitioner depicts themselves as their yidam or meditational deity, and their circumstances as the Deity’s mala (A string of beads or knots). The intention of the generation stage is to eliminate ordinary perceptions and ordinary ideas, which are shown to be barriers to nirvana in Vajrayana Buddhism.