A set of manifestations of the feminine Buddha green Tara – that’s why she’s pictured a lot of larger within the center of the artwork. Tara has 21 primary emanations, every of that performs completely different activities like pacification, increase and so forth. The different colors of those twenty one Tara correspond to the four differing kinds of enlightened activity. “Tara is that the feminine Buddha of enlightened activity, of that there square measure four types: pacifying, increasing, overpowering and wrathful.

Tara (Sanskrit, "star") is a Buddhist goddess and bodhisattva. She is characterized by her compassion and is especially popular in Tibet, Nepal, and Mongolia. She is known as the "mother of liberation", and represents the virtues of success in work and achievements. According to Buddhist tradition, Tara was born out of the tears of compassion of the Bodhisattva Avalokiteshvara. There are many forms of Tara, including various popular lists of 21 different emanations of Tara. According to Sarvajnamitra, she has a universal form (visva-rupa), that encompasses all living beings and deities, and which changes with the needs of each being.

Each of these is represented by a different color: 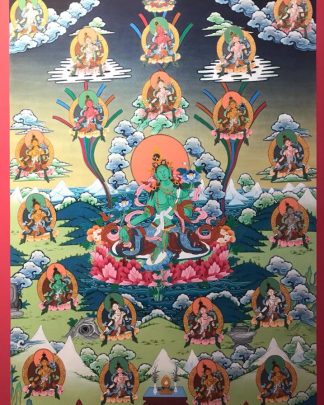