Shakyamuni Buddha is known as Buddha who is initially born as a Siddhartha Gautam.  He was born on 563 B.C. in Lumbini, the western part of Nepal, the son of King Suddhodhan and Queen Mayadevi. When he was a young adult his exposure with the outside world drove him to pursue a greater insight of life and spiritual fulfillment. Gautam Buddha is assumed to have had 550 incarnations. To recognize from all alternative Buddhas, he has been renowned as Shakyamuni (The lion of Sakya kin group, the son of King Suddhodhana)   Bodhi” or knowledge He stayed fasting for 6 years  and meditate to gain knowledge on Bodhi . Later he was called “Buddha” which means “the enlightened one”. So the main theme is “Evil is suffering and good is happiness”.

1000 Buddha (Shakyamuni Buddha ) is portrayed meditating in the middle of the canvas, holding an alms bowl in his left hand and his right palm touching the floor in the bhumisparsha mudra. This gesture symbolizes Buddha's victory out over evil Mara, which he accomplished by praying to and summoning the soil goddess Bhudevi. The multiplication of Buddhas in the painting's background symbolizes the universal nature of enlightenment. 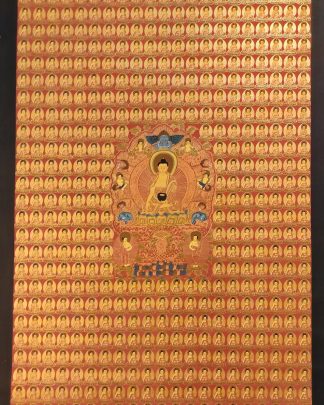