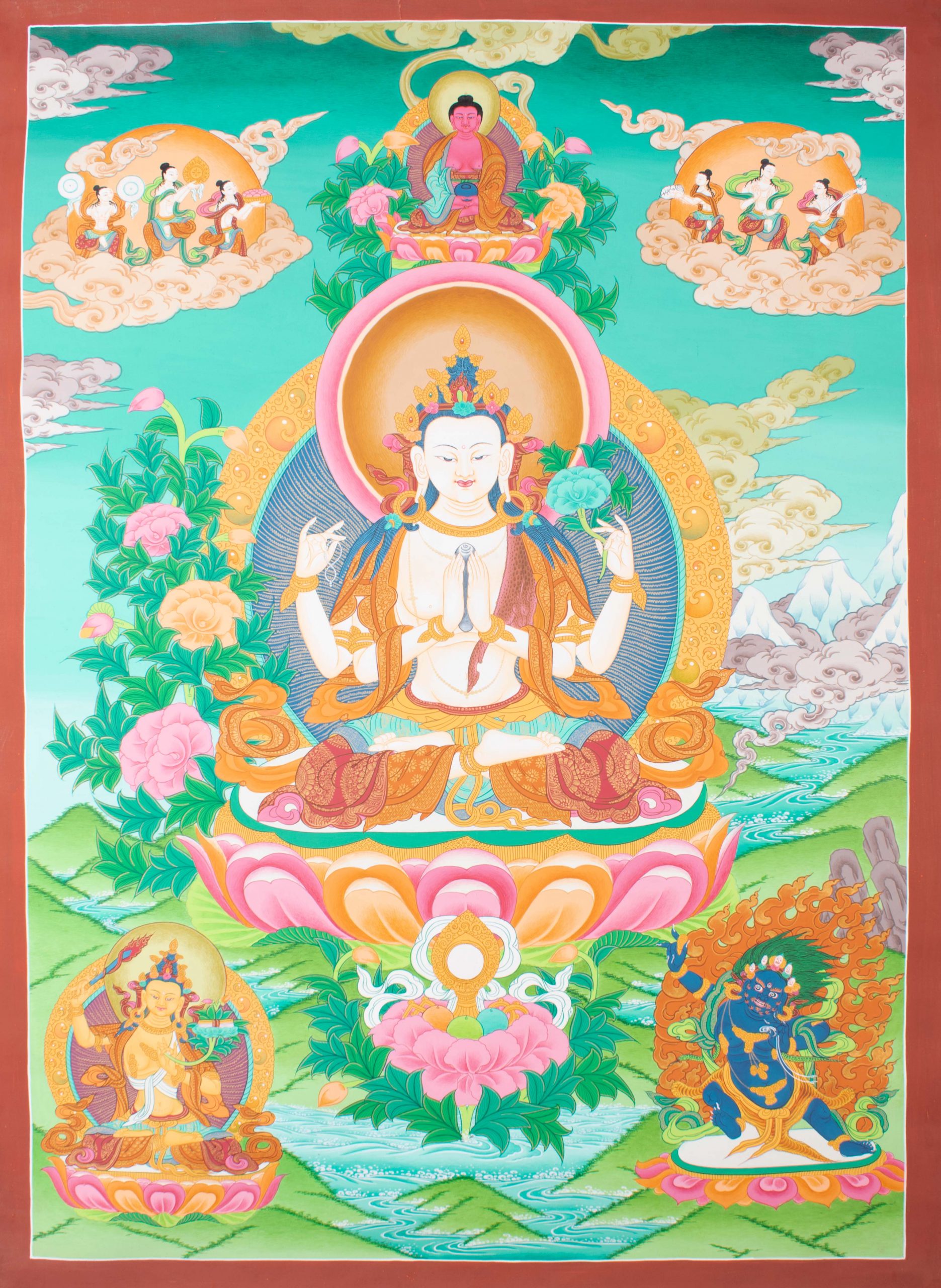 Chenrezig is the most venerated of all Bodhisattvas, emulating the Buddhas’ kindness. He is the one who glances with an unflinching eye. In times of adversity and challenge. He hears to the pleas of all sentient beings. He is considered as Avalokitesvara. He pledges never to rest until he has succeeded in the liberation of all sentient creatures from samsara, but despite his best efforts, his mission is enormous. To successfully achieve out to those in need, his arms are fractured into numerous pieces to reach out to so many cries of anguish. He saw visions of eleven heads and a thousand arms fanned out about him at times. He is associated with the six-syllable mantra Om Mani Padme Hum, which, when chanted aloud or silently, evokes his loving power and assistance.

Chenrezig is deemed Tibet’s patron, and the Dali Lama, the living Buddha, is an incarnation of him. We get such a taste of our connection with Chenrezig whenever we are compassionate or sense the love of another aimed at us, whether human or animal. In Buddhism, the term “bodhisattva” has two basic meanings. It literally means “enlightenment (‘bodhi’) being (‘sattva’)” in Sanskrit. One of them, according to Theravada and some Mahayanists, is that of a person who is dedicated to becoming a Buddha. The opposite view, espoused by some Mahayanists, is that of a Buddha who decides not to become enlightened to help others.

Chenrezig is not just a Buddhist god, but also a Mongolian divinity. OM MANI PADME HUM is recited by everyone in every nook and corner of the world by young and old. Chenrezig’s holy action is want everyone to have the ability to discuss OM MANI PADME HUM, which helps you generate compassion for others. Chenrezig will assist you if you chant OM MANI PADME HUM. It is straightforward to purify negative karma and acquire realizations when you pray to Chenrezig. This is in addition to the temporary rewards associated with this life’s work. There is no question that you can be guided by Chenrezig whenever we have issues or anxieties, without needing to put in a lot of endeavor in reflection and meditation. And at death time, you will easily be born in the Chenrezig pure land, Potala, or in the Amitabha pure land, Dewa Chen (Skt: Sukhavati). Any heavy negative karma you have collected can be purified by reciting OM MANI PADME HUM and by doing nyung nä practice.

Chenrezig aids creatures through the four immeasurable vehicles. The inner arms’ palms are united at the heart, and they clasp a sky-blue, wish-fulfilling diamond. This represents that Chenrezig’s thinking is never distinct from the all-pervasive primeval wisdom, no matter how he manifests to benefit beings.

Chenrezig is clutching crystalline pearls in his outer right hand and moving them around like a mala when chanting mantras. This reflects the fact that Chenrezig nourishes all beings at all periods. Chenrezig is constantly helping sentient beings and moving the wheel of enlightenment action, just like the steady movement of counting beads.

Chenrezig clutches a lotus flower in his outer left hand. This is Chenrezig manifesting in whatever forms are appropriate to assist sentient individuals in accordance with their mental faculties, circumstances, and propensities. Chenrezig could emerge in any of the realms, especially death and the hungry ghost realms. Chenrezig, as he appears, is free of any of the worldly fingerprints of the various realms of life, rather like a lotus flower growing in a marsh appears to be free of the mud stain. Chenrezig’s left hand, which is clutching the flower, represents this sterility.

All the image’s many elements have meaningful connections to Chenrezig’s amazing traits, and by concentrating on these details as we visualize the image in meditation, we can gradually awaken our own awareness of those same qualities in ourselves.

Chenrezig’s mantra has many syllables. Chengriz’s mantra is Om Mani Padme Hum, which is a Buddhist mantra.

Mani: Mani, which signifies jewel, represents the method’s elements of selfless intent to become enlightened, compassion, and love. The altruistic mind of enlightenment can eradicate the poverty, or problems, of cyclic existence and lonely calm, just as a jewel can remove poverty. Similarly, the selfless goal to become enlightened meets the wishes of sentient beings, just as a jewel fulfills the wishes of sentient beings.

Hum: Purity requires an indivisible oneness of method and wisdom, which would be symbolized by the final syllable hum, which implies indivisibility. This indivisibility of method and wisdom, according to the sutra system, refers to wisdom affected by technique and method affected by wisdom. It alludes with one consciousness in which the whole form of both wisdom and method coexists as one undifferentiable entity inside the mantra or tantric vehicle. The hum is the root syllable of Akshobhya, the immovable, the unfluctuating, something which can be disturbed by anything, in terms of the five Conqueror Buddhas’ seed syllables.

Every bodhisattva’s philosophy is centered on universal love and compassion, but nothing is ever this more clear than in Chenrezig. Throughout many aspects, he is the archetypal embodiment of compassion, and that is a prerequisite for enlightenment. He emerges as a specific entity or, more frequently, as an archetypal bodhisattva who is the ultimate expression of every Buddha’s love throughout mahayana Buddhism.

Chenrezig’s tale as a unique soul:

The biography of Chenrezig as both a distinct being is also the story of compassion as it evolves in the imagination, whether it has been based on fact or fictitious legend. Compassion originates from a genuine desire for understanding and a perception of life’s meaning that emphasizes others. As the limitless vastness of the work unfolds and the inherent nature of samsara becomes apparent, the initially heroic approach to assisting others mellows and expands. One also observes ignorance’s diabolical brilliance in eluding the truth and thwarting attempts to destroy it. This requires you to learn how to tackle it from diverse angles at the same time.

After a lengthy spiritual battle, one felt obligated to confront the problem’s real origin and accept and understand it rather than attacking it. To use it, one must learn to harness both the masculine and feminine aspects of mind’s innate loving compassion, as well as be both dynamic and sensitive in one’s interactions with mind’s various expressions. The traditional tale reflects all these steps:

A million young men pledged to become Buddhas countless ages ago, each offering a different resolution. One resolved to become Gautama Buddha in a time much further in the future, which has now come to be known as our era. Another, Chenrezig resolved to await until all the others had achieved enlightenment before becoming enlightened himself, vowing to assist them all and to be the servant of any being seeking enlightenment anywhere in the universe. He would both instruct them and ask the Buddhas questions on their behalf, as people sometimes struggle to formulate their open part.

He undertook many voyages into the many domains of existence of all beings, from the greatest realms of the gods to the most wretched hells, feeling tremendous sympathy for all beings. The more he glimpsed of the chaos and suffering that dominated the world, the more he wants to assist. May I assist all beings, he prayed to the Buddhas. May my body be smashed into a thousand pieces if I ever tire of this wonderful work. Going to follow that, he went to the darkest hell (avici hell) and liberated as many beings as were ready to listen to his teachings. He gradually advanced through the worlds until he reached the deva realms. While he looked around the cosmos, he saw that although he had liberated thousands of individuals.

His commitment wavered because of this, as he flew into a thousand pieces like the kernels of a pomegranate. He pleaded out to all the Buddhas, who, like snowflakes, came to his assistance and recovered his illness via their benevolent influence. Afterwards when, he had a thousand arms and nine heads, to which Amitabha Buddha added a particular head and his superior wisdom’s endorsement. Then Bodhisattva Vajrayana added a wrathful head, representing all of the Buddhas’ special abilities. Chenrezig is sometimes depicted with a thousand arms and eleven heads over this.

It would not be common for one buddha, or a bodhisattva, to be raised to the center of a teachings, as Buddha Amitabha is in the Japanese Pure Land school’s teachings. But the fact that a whole nation, with the greatest diversity of Buddhism on the planet, believes Chenrezig itself to be the guide and protector is a real testament to him.

Tibetans believe that the early rulers who brought Buddhism to Tibet have been derived from Chenrezig and Manjushree. Ever since, several of the greatest reincarnate lamas have indeed been regarded their emanations, such as the seventeen generations of Karmapas and, more recently, the fourteen Dalai Lamas. Even notably, practically every Buddhist in Tibet recited Chenrezig’s mantra om mani padme hung daily, to the extent whereby Tibetan children learn the mani mantra before learning to say mama or papa, as per a traditional proverb

Mahayana Buddhism does have a multitude of techniques for converting toxic energy into positive energy. Compassion is at the foundation of every one of them. Chenrezig the bodhisattva is a symbol for all these expressions of compassion in action. As per the Debate on Chenrezig’s Revelation: Were one thing and one thing alone to represent every enlightened quality, as though it were in the palm of one’s hand, what would it be? Great compassion.

Compassion’s light beams in a sensible and timely way. It sheds light on issues relevant to a specific discipline. It illustrates how well the family member may bring peace, understanding, and harmony into the home. It offers the solitary meditator how to connect to the complexities of his or her own brain in a loving yet rigorous manner. It demonstrates how to govern and how to cope with suffering to the ruler and the affected. Some compassion tactics are merely cosmetic and restorative. Others are profound and revolutionary. Chenrezig is renowned for using the strength of sound as a gateway to liberation and is one of the deeper techniques.

Chenrezig has one, three, five, seven, nine, eleven, and so on up to 84,000 faces and two, four, six, eight, ten, twelve, and so on up to 84,000 arms mostly in tantras. Gentle, kind, and merciful are some of his forms. Its intention is to assist wretched ghosts and spirits even while eliminating some of the participants’ bad karma, which was produced by greed and avarice. The red kneeling form of Chenrezig, known as ‘He who shakes the very foundations of existence,’ is even more wrathful than this. Everyone else has compassion’s vengeful expression.

The most prevalent version, with one face and four arms, is indeed the solitary tantric technique that involves no risk and might even be performed by anyone. In general, mahayana Buddhists believe Chenrezig’s grace is so powerful that only one sincere recitation of his mantra or one open-hearted look into his gentle expression is enough to plant the seed of future illumination in the mind.

“Whenever we see something which could be done to bring benefit to others, no matter how small, we should do it.”  – Chamgon Khentin Tai Situ Rinpoche