The Life of Buddha thangka paintings portray the most significant occurrences in Siddhartha’s life, identified as the “Twelve Great Deeds of the Buddha’s Life.” These works of art aren’t only depictions of the historical Buddha’s most important events; they’re also a visible representation of various conceptual components of Buddhism, especially the path to spiritual enlightenment. The Thangka Paintings of the Life of Buddha are more than just depictions of the major events in the historical Siddhartha’s journey to spiritual enlightenment. This article delves into the twelve significant events of Siddhartha Gautama’s life, which are split into three main phases:

The Buddha’s pledge to come to Earth 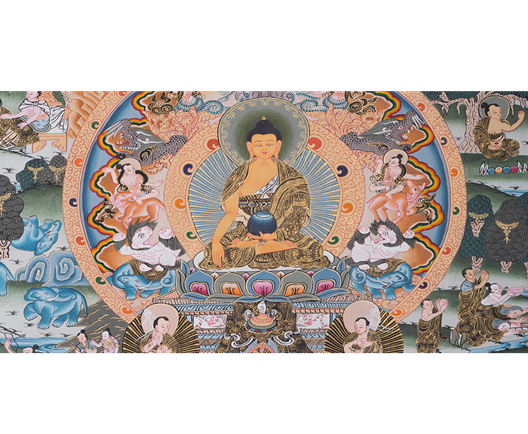 The princess Maya Devi, who dreams a white elephant, represents Buddha’s ascension into our realm. Maya Devi had a dream that she was being transported to a lake in the Himalaya by four devas (spirits), according to tradition. There, she was attacked by a white elephant, who used his tusks to rip the right side of her stomach apart. Finally, the elephant vanished, and the queen awoke, knowing she had received a crucial message, as the elephant is a Nepalese symbol of greatness. The elephant is also a symbol of power and intellect, and his hue is linked to the gray clouds that carry the rain that nourishes the soil. So, in this analogy, the white elephant. After ten months of pregnancy Maya Devi went to her father’s kingdom and deliver the baby with the assistance of her mother. However, on the way to her childhood home, she decides to stop in a beautiful garden in Lumbini and take a rest underneath a blossoming Sala tree.

According to legend, Buddha was born from her mother’s right side while she stood holding a tree branch. Maya Devi’s unusual stance had an impact on feminine iconography throughout Asia. Traditional dance choreographers have adopted the sinuous motion, which has inspired multiple generations of artists. The event is also depicted with the Hindu gods Indra and Brahma present at the time of birth. Buddha was able to walk almost immediately. In fact, he made seven steps forward, each one accompanied by the appearance of a lotus flower on the ground. Siddhartha Gautama was his name. Siddhartha signifies “the One who achieves his purpose” in Sanskrit. Maya Devi, the princess, died seven days later. 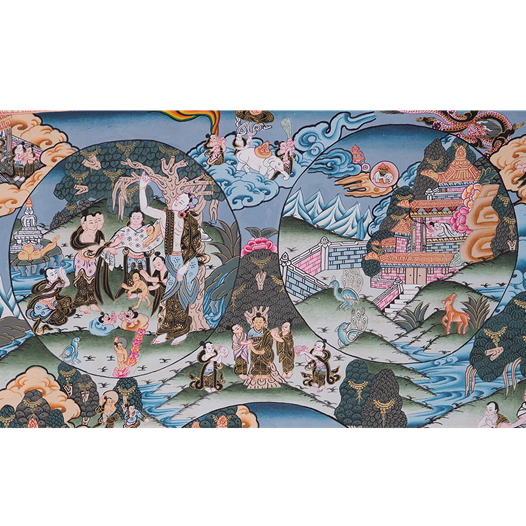 Maya Devi dreaming of elephant and birth of Buddha

Buddha’s infancy and early years in the world

Little is known about prince Siddhartha’s early years. Siddhartha lived a luxurious and secluded existence since his father had been warned that the kid would abandon his palace and royal destiny to pursue a spiritual path. He had the best education possible and mastered all the lessons he was taught. In his younger years, he excelled in sports, particularly horseback riding and archery. He had a reputation for being both physically and sexually beautiful. Prince Siddhartha became a true man of the world when he reached adulthood and accepted royal duties, with a retinue of several queens and attendant ladies. We’ll look at the event that inspired Siddhartha to begin his ascetic life and his search for a solution to human. 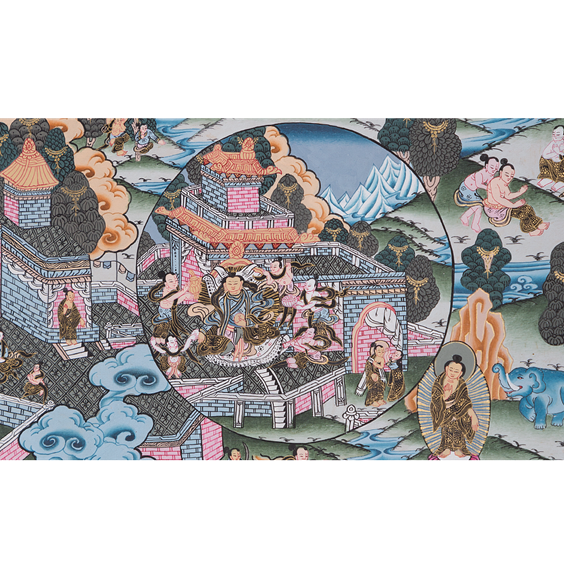 Buddha’s father tried to protect his son from the harsh realities of life after being warned by court astrologers that he might give it all up and adopt the road of meditation. This situation persisted until Siddhartha decided to depart the palace with a chariot driven by one of his slaves. The prince encounters an old guy, a sick man, and a dead man on his voyage, causing immense mental turmoil. He also encounters an ascetic monk, and after questioning him, Gautama chooses to adopt his example, believing that this will help him to calm down. Siddhartha departs the palace, having made his decision, to continue his search for the Life’s truth, sorrow, and genuine happiness. 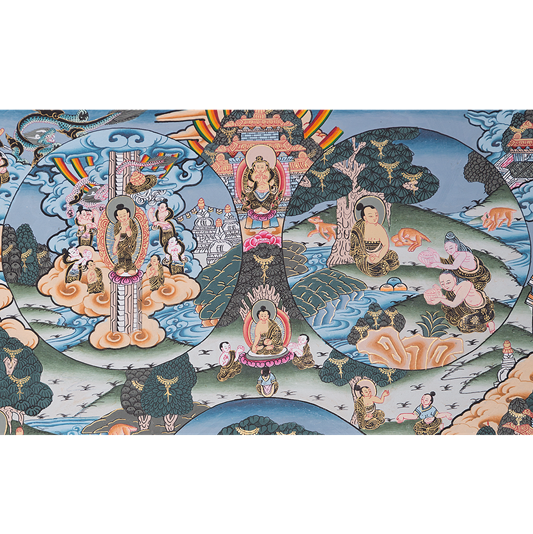 Siddhartha departs from the palace and begins his austere journey

Gautama allegedly left his father’s magnificent mansion in the middle of the night, leaving behind his sleeping wife and son, according to mythology. Siddhartha cut his long and magnificent hair the first thing he did after leaving his home. In the thangka artwork, this story is depicted as a symbol of Buddha’s unwavering commitment. The little prince, dressed as a beggar, walks from place to place with his begging bowl. Siddhartha meets various masters during this time and learns how to meditate. Despite everything he had learned, he realized that he was still vulnerable to old age, sickness, and death, and that his search was not yet complete. 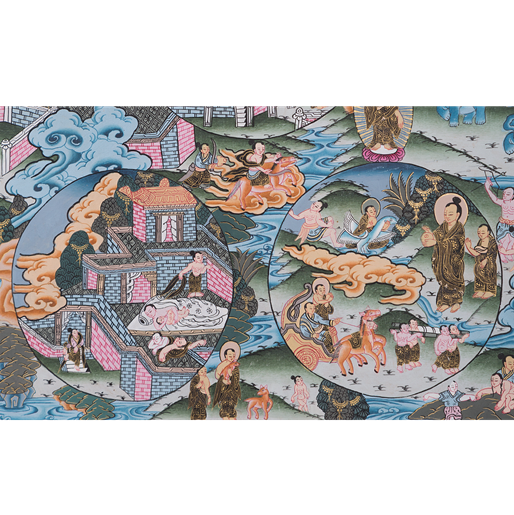 The six years of austerity

Buddha came to a nice hermitage by a gorgeous stream in his journey for enlightenment, where he joined five mendicants who practiced a discipline based on extreme fasting. According to folklore, he ate a single grain of rice for the first two years, drank a single drop of water for the next two, and took nothing at all for the final two years. He did these exercises for six years, getting so slender that he could practically feel his spine when he touched his stomach. The thangka depicts Buddha meditating in the lotus position under a tree, his body gravely afflicted by the experience. Gautama did not obtain insight or the answer despite his enormous anguish and suffering. He intends to return to begging for food in order to strengthen his body. 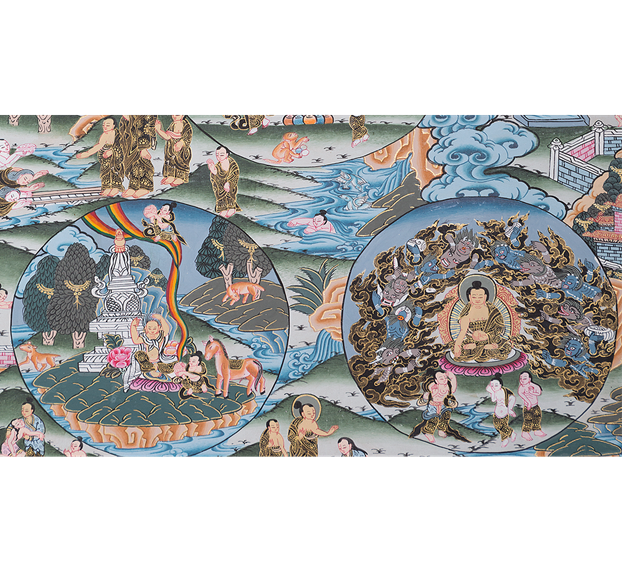 Meditation in search of enlightenment and interacting with human beings

Gautama traveled to Gaya in search of a good location to sit and meditate. He sat on the east side of a banyan tree. There, he met Sujata, a native girl who offered him a bowl of rice. It was the first food he’d consumed in years, and it quickly brought his body back to life. Sujata was delighted and thrilled when the holy man accepted her meal, so she started dancing joyfully and reappeared with further offerings in the company of her servant, as depicted in the artwork. Gautama, abandoning himself to meditation, pledged that he would not leave that position until he had achieved full enlightenment.

All veils of conflicting sentiments and stiff concepts vanished now of full realization, and Buddha experienced the all-encompassing here and now. All distinctions in time and place vanished. Past, present, and future, both close and far, merged into a luminous state of intuitive happiness. He morphed into eternal, all-pervading consciousness. He knew and was everything through every cell in his body. He attained the title of Buddha, the Awakened One. Buddha walked across northern India after attaining enlightenment. For forty-five years, he never stopped teaching. From rulers to courtesans, he drew people from all castes and professions. He responded to their questions by pointing to the goal. Buddha encouraged his learners to think his teachings and confirm them via personal experience throughout his life. Buddhism is still known for its non-dogmatic approach. 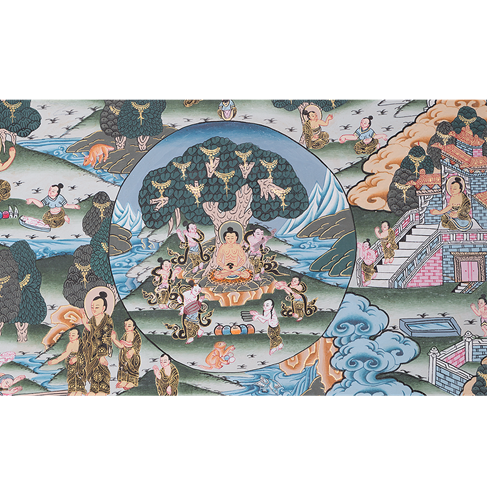 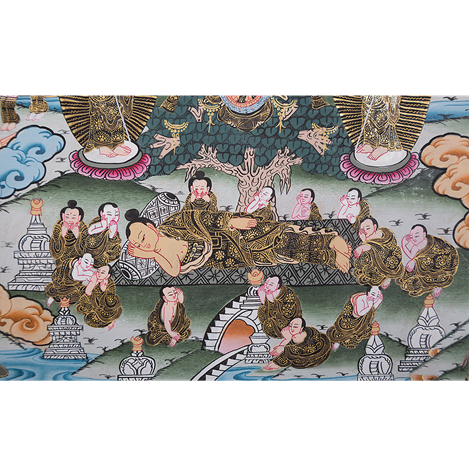 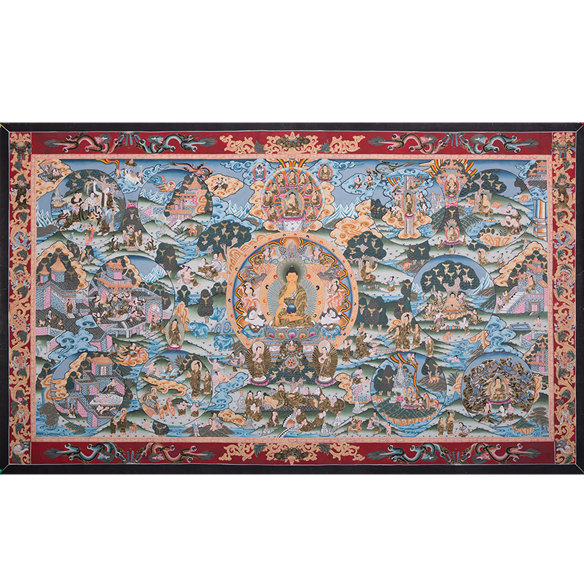 The historical Buddha Shakyamuni is always present in all Buddha Life thangkas. In a scene from the legend of Mara’s attack, he is seen holding a beggar’s bowl in his left hand and calling the ground as a witness with his right hand.

A Buddha Life thangka’s features might change, and distinct scenes may not always be found in the same location. However, the underlying pattern remains consistent. Buddhism was founded by the historical Buddha Shakyamuni. All authentic Buddhist teachings in the world today are based on his life story and teachings. We discover how and what we as Buddhist aspirants should practice, nurture, and strive for in our own spiritual journey via the deeds of his great life. His story is taught in every Buddhist institution on the planet. The Buddha’s life story is depicted here in a pictorial format. Viewing above images will leave deep impressions in your mind, allowing you to develop the same traits of compassion and wisdom that the Buddha demonstrated and taught during his lifetime, and eventually Buddhahood. May these heavenly images benefit you.