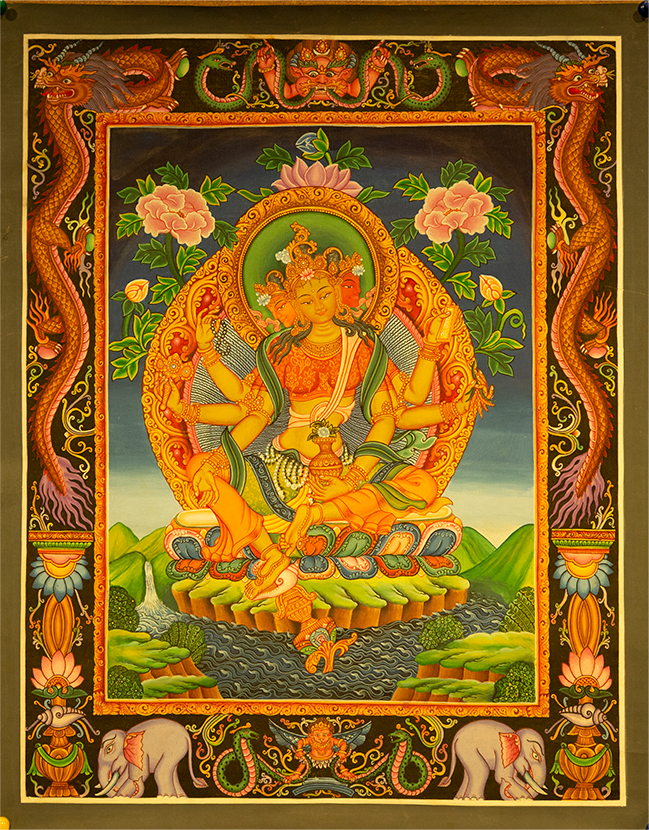 Vasudhara (Basundhara) name means “stream of gems” in Sanskrit. It means Buddhist bodhisattva of wealth, prosperity, and abundance. Vasudhara (Basundhara), goddess of abundance is the consort of Kuber (Jambala), the god of wealth. She is popular in many Buddhist countries and is a subject in Buddhist legends and art. Originally an Indian bodhisattva, her popularity has spread to southern Buddhist countries.

She has a high popularity in Nepal. She is a central figure in Newar Buddhism and has a strong follower among the Buddhist Newars of the Kathmandu Valley .In Lahul and Spiti, she is named Shiskar Apa. She is related to Hindu great goddess Lakshmi, and her Sanskrit name Vasundhara indicates she is the source of the eight “bountiful Vasus.” Consistent with the epic Mahabharat, she is the bounty that is the waters of the river Ganges—the goddess, Ganga which origin from the snows of the Himalayas. Similar to Green Tara posture, she is represented sitting on a lotus pedestal. She has six arms which she holds within the lower left hand her characteristic symbol, the treasure vase. The above hands holds another distinguishing attribute, the ears of corn (Tib. ‘Brui sne ma). The third left hand holds a book, the Prajnaparamita sutra.

The lower right hand is in the varada mudra of charity; the one above holds three precious wish-fulfilling jewels, while the upper hand makes a mudra of salutation. The right leg is pendent, and the foot is unsupported resting upon a vase. She has three faces Brown in right, reddish in left and yellow in the center. Sincere worshipping of the Goddess Basundhara will reward one with wealth, good fortune and wisdom.

Vasundhara is one of the important and popular feminine deities in Nepalese Buddhist society. Keeping the Vasundhara Thangka in a home is to honor this deity. She is believed to be the bestowed of wealth and prosperity similar to Laxmi Devi in Hinduism. It is said that if you’ve got thangka of this devotee in your office or home you’ll accumulate seven sorts of prosperity i.e. wealth, quality, offspring, long life, happiness, praise, and wisdom.